In 1995 a large group of vascular specialists from Russia participated in the World Congress of the International Union of Phlebology (UIP - Union Internationale de Phlebologie) which was held in London. It was for the first time that Russian phlebologists visited such a high-level international meeting. Colleagues from abroad were very surprised that in Russia there were still no professional society for those who were involved in a management of venous disease. Next year under initiative of Academician Victor Sergeevich Saveljev first steps were undertaken to register Russian Phlebological Association (RPA).
Founding meeting was organized on 15 Oct, 1997 in Moscow. Leading experts of that time approved RPA Constitution and elected Viktor Sergeevich Savelyev as a President, Evgeny Georgievich Yablokov as a Vice President and Alexander Ivanovich Kirienko as Executive Director. First list of Executive Committee members included Bogachev V.Yu. (executive secretary, Moscow), Zhukov B.N. (Samara), Konstantinova G.D. (Moscow), Katelnitsky I.I. (Rostov-on-Don) Makarova N.P. (Yekaterinburg), Stoyko Yu.M. (St. Petersburg), Alekperova T.V. (Moscow). The main declared goals of the RPA were research coordination, treatment standards development, physicians support and patients education.
First National Conferences of RPA was organized in 1998 and 1999 in Moscow. They attracted more than 1,500 delegates from Russia and post-Soviet countries mainly. The Third National Conferences of RPA in Rostov-on-Don (2001) was attended by more than 1000 participants, which indicated the growing interest in phlebology among Russian specialists. Since then, National Conferences were organized in Moscow (2003, 2004, 2006, 2008, 2010, 2012), Nizhny Novgorod (2014), Novosibirsk (2016), Ryazan (2018), Yaroslavl (2021), Kazan (2022). The geography of Association meetings indicates its All-Russian character and reflects one of RPA goals which is supporting of development of phlebology in every pert of such a giant country as Russia.
A number of large-scale projects have been conducted under the auspices of the RPA. Its members were involved in a multicenter international research RELIEF Study (Russian National Coordinator, Academician V.S. Saveljev). In 2001-2002 a large epidemiological study was carried out to establish chronic venous disease prevalence in 3000 industrial workers in Moscow. The FACT program (Risk Factors for Chronic Venous Insufficiency in the Practice of a Therapists) made it possible to identify the frequency of CVD in patients visiting a local physician. More than 400 internists from 30 Russian regions took part in this project. In 2011-2014 SPECTRUM Study were organized by RPA. 36 phlebologists from different regions of Russia followed about 900 patients for two years to estimate the efficacy of a specialized phlebological care.
RPA was one of the first professional societies in Russia which started to develop Guidelines on diagnostics, treatment and prevention of venous disease. First Guidelines on VTE was published in 2000. They were upgraded in 2010 and 2015. The fourth edition of VTE Guidelines (2022) is developed according to Ministry of Health of Russian Federation rules. Guidelines for CVD management were published in 2009 and upgraded in 2013 and 2018. After that CVD Guidelines of RPA were adjusted to Ministry of Health rules and published as mandatory for clinical practice.
RPA initiated and developed on-going Russian Registries of CVD and VTE. Those are open online projects with a lot of in-built tools for every physician who wants to conduct research or to follow patients from their clinical practice.
Since 1996 Association is published its official scientific journal. The first was "Phlebolymphology" with V.S. Saveliev as an Editor-in-Chief. The circulation of the journal in 1996 was 1000 copies, and by 2001 it exceeded 5000. In 2007 PRA started its new journal publication “Flebologiya” (A.I. Kirienko as an Editor-in-Chief). This is a quarterly peer-reviewed journal indexed in SCOPUS and Web of Science (Russian Science Citation Index).
In September 2001 RPA became a member of the International Union of Phlebology. In 2017 delegates of Association took part in a founding meeting of European College of Phlebology. In 2020 RPA became a member of International Union of Angiology.
In 2013, the founder and first RPA President V.S. Savelyev passed away. At 10th National Conference of RPA Academician Aleksander Ivanovich Kirienko (Moscow) was elected as a President. In 2016-2020 Prof. Yuri Mikhailovich Stoyko (Moscow) was a President of RPA. In 2020 Prof. Igor Aleksandrovich Suchkov from Ryazan was elected as a President.
The Board of RPA now includes respected specialists from all over the Russia. Vice-Presidents are Oleg Guzhkov (Yaroslavl), Evgeny Ilyukhin (Saint-Petersburg) and Maksim Kydukin (Nizhny Novgorod). General Secretary is Igor Zolotukhin from Moscow. 24 members of Executive Committee represent Moscow, Saint-Petersburg, Ryazan, Sympheropol, Novosibirsk, Chelyabinsk, Kazan, Vladivostok, Barnaul, Kaliningrad, Samara, Tambov and Krasnodar. 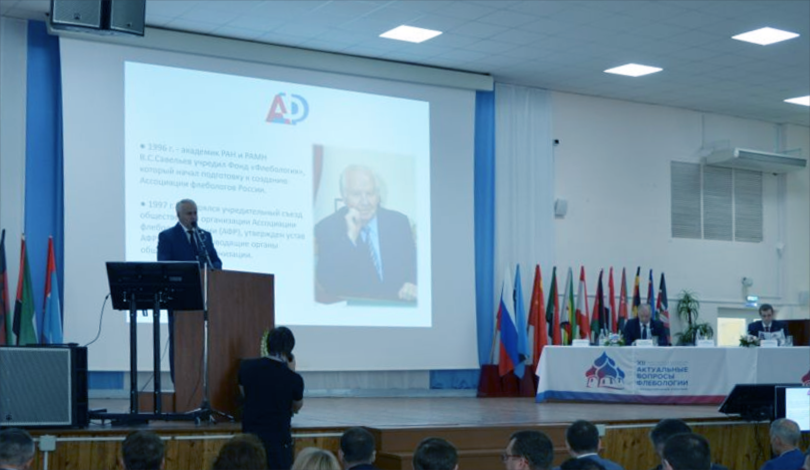